Just as the automobile has gone through numerous transformations over the last century, so has the auto body repair industry. When Henry Ford first mass produced the car in 1908, it was so new and unlike any other means of transportation at the time, that no one, outside of the few people who designed and built the old Model T Fords, was really qualified to do repairs. In the early years, many people turned to a machinist or even a bicycle repair shop for car repairs. As the popularity of the automobile grew, so did the demand for experienced and reliable mechanics and auto body specialists.

By the Roaring '20s, there were a good number of cars on the roads, which meant more collisions, breakdowns and damage. Manufacturers and dealerships needed to provide drivers with more efficient means of repairing their vehicles. To this end, manufacturers started making standardized parts that could easily replace damaged components of a vehicle. Dealerships and private repair companies were now able to put mechanics into place that were able to easily repair vehicles using these prefab parts. Then, with the Great Depression and the Second World War, there was a major decline in production of parts and and a subsequent decline in the need for repairs.

An economic boom of unprecedented levels came to North America with the end of the war while automobile production resumed at breakneck speed. This, in turn, created a high demand for auto body repairs. By the '60s, cars were becoming more intricate, unique, and powerful, thanks to advancements in engine performance and body design. Auto body repair shops began to offer more customized work for drivers, and became a lot more precise in their repair methods. In time, cars became lighter and more fuel efficient. Due to the high number of fatalities and injuries, higher standards of safety were implemented with requirements like safety windshields and seatbelts. Collision repair, as a result, had to conform to these higher standards.

Those that work on the vehicles of today require an extensive amount of training and skill to perform repairs on them. The safety standards that must be met are higher than ever. Due to these facts, it is more important than ever to have your vehicle repaired by a reputable and reliable auto body repair specialist.

Rus Wallden, Owner of RustBlasters, in Chilliwack, BC, is both qualified and experienced in all aspects of rust repair, restoration and paint. Jay Klaus, our metal fabricator, is highly skilled in metal fabrication and body work. Come on in and see us! You'll be glad you did. 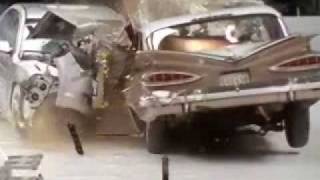